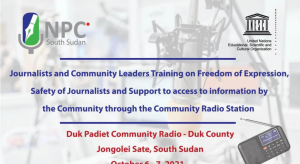 Speaking during the opening ceremony, Kuer Diing appreciated the technical support being rendered by the NPC-SS despite the growing water level caused by floods in the county.

On his part, the Program Coordinator of NPC-SS Mr. Poverty Alfred said more technical support is still needed to strengthen the capacity of Duk Padiet FM radio to continue sensitizing and keeping the communities informed.

“Internet access is a huge issue at Duk Padiet Community Radio. Most of the programs and equipment are affected because the software installed in the computers is getting out of date. Sometimes, the radio goes off because of outdated systems and unreliable power supply,” Alfred said.

On his part, the Program Manager of Duk Padiet Radio Mr. Gai Michael appreciated the NPC-SS and UNESCO for building the capacity of his staff even as the floods submerged most parts of the facility.

Want to join the discussion?
Feel free to contribute!